On a cruise last year, I got into it with a gun nut.

Remember cruises? Before-COVID, children, we used to holiday on luxurious ocean liners.
Last year we sailed from Rome to San Diego via the Panama Canal.

No one got ill.

The voyage was also made wonderful by the acoustic duo who played three times a day – Gilly and the Girl. They are super musicians and lovely, lovely people. Here’s their link. Check them out. All their gigs have been cancelled thanks to COVID, so they’re doing live shows via Facebook. Online busking.

On the first leg, we made cruise-buddies, our trivia team, couples from Canada and Hawaii.

Anyway, to get to the point, the Hawaiian husband, lovely guy, great company, was – probably still is – a gun nut. Ex-military, handgun in the home for personal protection, the full nine yards. We had a full and frank discussion one night after a few – okay, a bucket load – of drinks.

He couldn’t accept that anyone could possibly write mystery stories when they’d never fired a gun.

Oh, and it’s not a gun FFS. Gun’s are artillery pieces, the big things that lob shells.

What you pull out of your holster is a pistol or a handgun or a revolver, or … whatever.
I tried to point out there weren’t any guns in Meet Me at the Hanging Tree, even handguns.

He wasn’t having any of that. “How can you have a murder mystery without guns!”

Well, Meet Me isn’t a murder mystery, as such, because no one gets killed. That subtlety got lost somewhere after the second or third post-dinner cocktail

But he got me to thinking.

I chose not to mention in our lively debate – mainly because it would defeat my drunken point – there are dozens of guns in The First Guerrilla. Sebastien shoots a rifle and a shotgun. There are machine-guns, mortars, even field guns.
Perhaps he had a point.

Then I started writing my new story that I’m rather excited about. It’s a hard-boiled detective type thing. The main character seems to be a nice guy out on his luck, living in a caravan park on his savings, except he’s got a past he’s trying to escape which comes back to haunt him. It starts with a scene in a firing range.

So, I did it. I went to a shooting range and fired guns.

I can now reveal my main startling finding.

I got a two for one offer. Hire a’ 30-shot pistol package’ get a ‘rim-fire rifle package’ free. I looked at the handguns on offer and decided it would suit my research best to upgrade to a Glock 17 package because, you know, Glock. Cool guys on TV shoot Glocks. 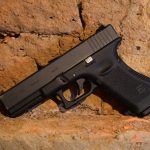 I got a bolt-action .22 rifle to shoot first.

I learned a bit that’ll help with my guerrilla books. It smelt of varnish and gun oil when I aimed it. You really have to get your cheek off the rifle butt to operate the bolt. That sort of thing.

However, overall, shooting a .22 at a stationary target was boring. Like shooting a pop gun. In fact, my cousin Clive, only once, let me have a go with his air gun in the backyard. It was way more exciting.

Shooting the Glock was cool.

The blast and the jolt up your arm were much more satisfying.

I found out heaps and heaps. For a start, I’ve read, or Clive told me, that you’d be lucky to hit anything ten yards away with a pistol. That’s correct if you hold it like a gangbanger in a cop show or a gunslinger in a western. If you do it the way the trainer showed me, with both hands, aiming at someone’s chest from ten metres, you’re going to hit them.

Here are my targets as proof. 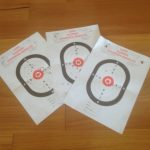 When I moved the target back to 20 metres, at the end of the session, after I’d had a bit of practice, I got every shot in the scoring circles.

Please note, before you mock me with sarcastic derision, one of my key learnings was that I should have taken my glasses. The rifle and pistol sights were a fuzzy blur without them.

Also, a .22 bullet might give you a nasty sting, but a 9mm Glock round is gonna hurt. I didn’t stand in front of the target and try it because it’s somewhat frowned upon at the better run shooting ranges but take it from me.

I won’t bore you with the rest here. I’ll keep it for the opening chapter of my work-in-progress thriller.

Would I go shooting again?

Hell ya! You bet! In a heartbeat!

I looked online. A Glock of my own would set me back at least $500, plus bullets at about 40 cents each, plus range fees or club membership.

I’m probably not a gun nut, yet. My position in favour of strict gun control stands, but I won’t ever again wonder why people get so excited about shooting.

Fortunately, The First Guerrilla doesn’t need anything re-written after my redneck sojourn. **wipes brow** That’s probably thanks to the folk who know something about firearms who critiqued for me before it went on Amazon. Ta, guys.

2 thoughts to “Guess what? Shooting is fun!”